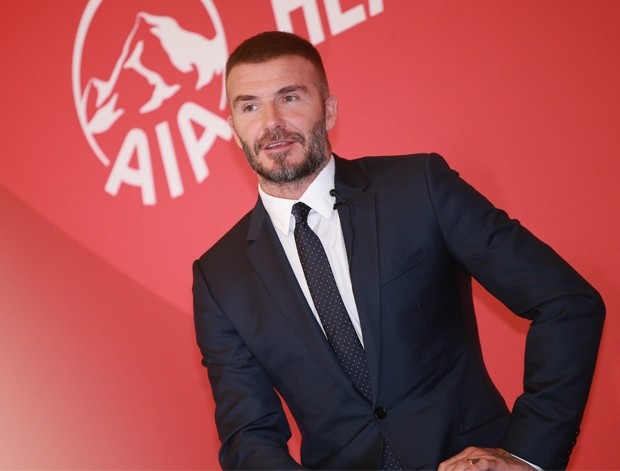 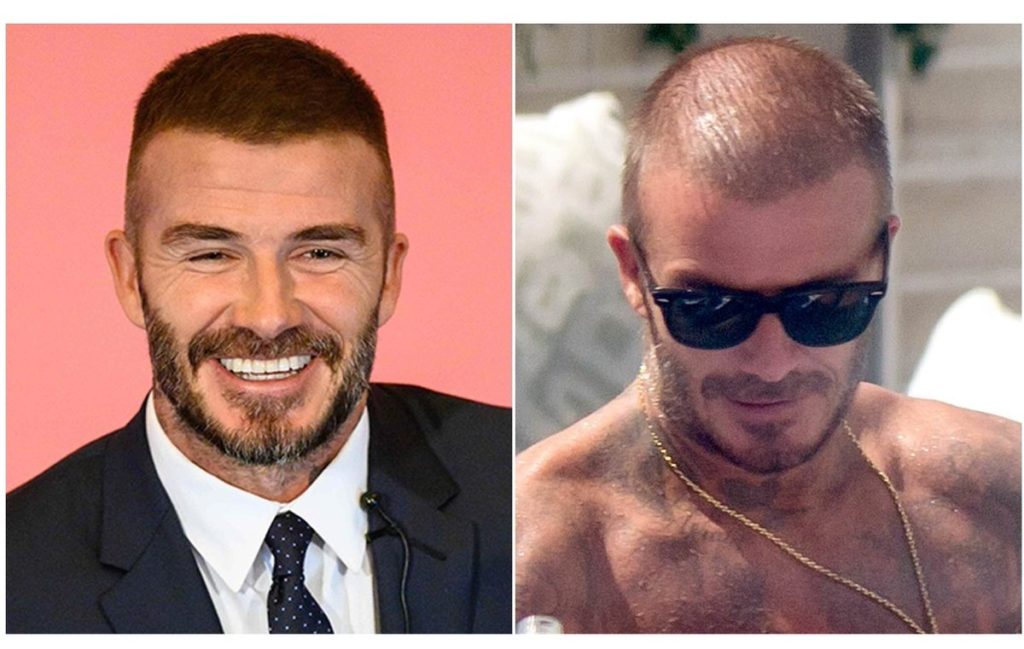 A man’s hair should be his own business, especially his thinning hair.  Except when you are an icon of men’s style and hair fashion.  David Beckham has spent his entire life in the spotlight and this kind of life tends to invite inquiry into all areas of your life, especially your hair.

From the photos circulating recently, it looks like we are at the end of an era.  Yes, it seems Beck’s is just like the rest of us, it has succumbed to the dreaded effects of male pattern hair loss.  David Beckham is losing his hair – we can’t believe we said it.  And, he has started to use hair thickening products for men.

The fact that Beck’s in now using hair thickening products isn’t bad or sad news for the rest of us.  It simply proves that his iconic hair isn’t invincible like we all. thought it was. It shows us that it’s OK to do something about your thinning hair. And why not? If it makes you feel better, you should.  It will certainly make you look better (younger, sexier and iconic!).

Our team has notice from the recent circulation of photos, that he has been getting some hair thickening help from what we all know to be hair fibres. 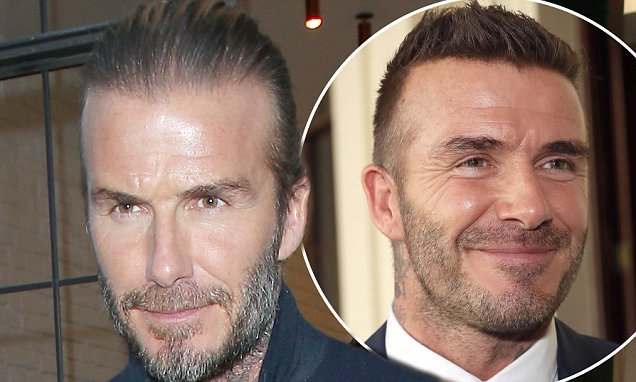 The facts of hair loss: David Beckham is a regular hair guy

In the last few years the paparazzi has been noticing that Beck’s hair has been starting to thin, not drastically, but subtlety.  At 43 years old, he is not alone.  25 per cent of men go bald before they’re 30. By 40, that number has risen to 40 per cent. There are various stages of hair loss and the speed at which is can deforest your follicles will vary, for many men it will be inevitable.

Despite protestations that it makes you look more masculine, being linked to increased testosterone levels and simplifying your life immeasurably, it can still be pretty crushing. Very crushing.

Studies show how it robs many people of their:

Many men (and women) say that hair loss is always on their mind and that they struggle to get used to looking at their thinning hair in the mirror. We have had conversations where men say they feel like they are dying inside.

If you are feeling this way, it’s OK.  You are not alone and you are not going crazy.

It’s normal to feel this way.  You are losing something that has been intrinsic to your person hood and in part defines who you are.  We are sure that Beckham is feeling much the same which is why he has embarked upon using hair thickening products for men to help keep his iconic locks for longer.

It seems both Spencer Kobren and Spencer ‘Spex’ Stevenson of the Bald Truth hair loss talk show, are in agreement that this is one of the most likely reason that David Beckham’s hair has been looking thicker in public, and thinner when caught in candid paparazzi snaps.

“Concealer fibres are well known among celebrity patients.  The give-away for me is the darker colour compared to his normal brown, grey-ish look,” advises Spex.

“They’re pretty good products – if they’re used by people who have a lot of hair, they could really mask a lot of hair loss,” Kobren told The Telegraph. Adding that, should Beckham open up about this being his hairstyling secret, “It would be huge. It would be a tremendous benefit … especially in the UK because he’s so popular

Back in 2017 there were rumours circulating that the 43 year old had a hair transplant to photos in September 2018 showing his noticeably thinning hair on top.

It was in August 2018 that our Biothik Hair expert team noticed that something had significantly changed about David Beckham’s hair and we are very certain that he has been using microscopic hair fibres to make his hair look thicker (each hair fibre has been laser cut to a microscopic size to ensure they are undetectable and invisible when applied appropriately).

Hair fibres appears to be a favourite cosmetic option among the iconic sportsmen of our time to deal with thinning hair.  It appears that Beck’s has taken a leaf out of fellow soccer star Wayne Rooney’s playbook.

These microscopic hair fibres are easy to use.  Simply, shake them onto your own growing hair and (hey presto!) they produce instantly thicker looking hair.  The mircroscopic fibres are infused with an electro static charge that causes the fibre to bind to your own hair, like a strong magnet.  They don’t easily come out.  Ask Rooney! 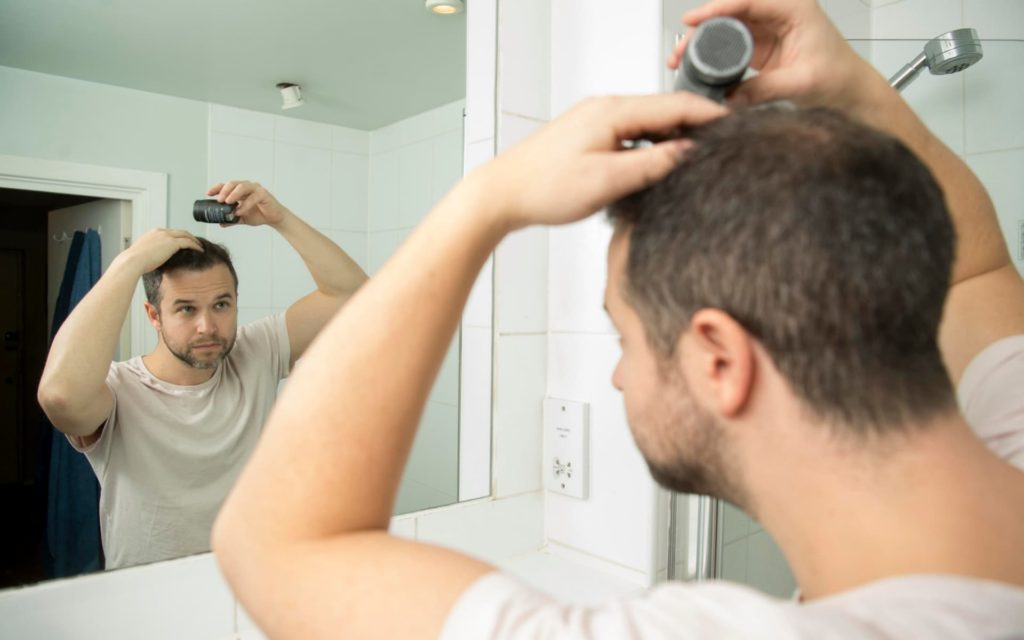 There are many products that promise hair thickening, but they simply don’t deliver.

The reason is they try to make each hair strand thicker by swelling the hair.  This simply doesn’t work, at least not well (and it’s not good for the hair) because you can only swell the hair a small percentage compared to what you really need.  Most people with hair loss are not looking for a 5% gain in hair thickness, rather you need a 50% or 100% gain in hair density and fullness to make it look like it once used to.  This is where Biothik hair fibres excel like no other, it can give you up to 200% thicker hair in 30 seconds – no other traditional hair thickening products for men can do this. That’s why David Beckham chooses to use hair fibres.

The Best Hair Thickening Solution for men that really works

To have instantly thicker hair, you really need more hair.  You can either try to regrow it through a hair transplant, or hair loss treatment like a laser therapy, or you can be like Beck’s and get instantly thicker hair with hair fibres for men.  It’s like adding more hair into your own, which is exactly what you need – more hair! Hair that looks natural, is secure and allows you to live the life you want to live.

Biothik hair fibres are the cosmetic choice of many sports people because they are scientifically proven to have the strongest bonding power to your own hair compared to other hair fibre brands.  It is so effective that they will stay in the hair all day and not come out, even when playing sport – just ask Wayne Rooney or any number of our customers (for privacy purposes we can’t reveal if Wayne Rooney is our customer).  This is the method thought to be responsible for Wayne Rooney’s thinning – then thick – then thinning again regular hair transformations.

For additional security and volume we recommend using our fibre locking mist.  It will lock the fibres in place and also hold your hair in place so you can feel confident your hair is looking perfect throughout the day.

Biothik as a cosmetic hair thickening technique can also colour the scalp, helping to reduce the contrast between the colour of the scalp and hair, further giving the impression of thicker hair.

The best way to use hair loss concealing fibres is to choose a colour that is slightly lighter than your own hair colour – this one tip has been a game changer for a number of our customers who are TV presenter and work under bright lights.

Using the exact same colour will tend to give the hair a darker, matte look and, particularly in men with mid-brown to blond hair.  This is not what you want.  You want to help replicate the lighter colour of the scalp at the roots of your hair.  Therefore, choose a slightly lighter colour.  For example, if you have black hair, use a dark brown if you have a lighter skin tone (e.g. Asian complexion).  You will find that our colour range in the lighter or blonde tones have an ash look, it won’t give you a slight red tinge like other hair fibres will.

Who should use cosmetic hair thickening products?

Cosmetic hair loss concealers such as microscopic fibres are only temporary hair loss solution.  Firstly, they will only work when there are enough existing hairs to cling to.  Secondly, they do not actually treat Male Pattern Baldness, they won’t reverse hair loss.

Male pattern hair loss is a permanent, progressive condition and the hair follicles that are subject to the effects of DHT will continue to deteriorate. This displays outwardly as thinning hair anywhere along the vertex from the crown to the hairline, and/or a receding hairline. At the moment, David Beckham’s hair looks to be thinning on top whilst his hairline appears to be relatively intact.

“In my opinion, David is now potentially on a slippy slope to further speculation surrounding his hair loss. It might not be too long before a hair transplant is his only option in order to continue to be the hair icon he is renowned for being,” said Spex in the Telegraph interview.

Although he has previously admitted he would rather shave his head than have hair restoration surgery, we are doubtful given his recent use of hair fibres.  Should the British Fashion Council ambassador wish to try to keep his hair it is likely he will pursue a custom hair loss treatment.

As with every style move David Beckham makes, we await the next chapter in his hair loss journey, though – given he is known to be extremely private when it comes to such personal matters – we may never know the whole truth regarding his choices.

Either way, if you are starting to notice your hair is thinning follow in the path of Beck’s.  Get yourself some Biothik Hair Fibres and enjoy thicker hair today!