Caffeine Shampoo: Does it work as a Hair Loss Treatment?

Caffeine shampoos for hair loss treatment aren’t new.  In fact, they have become quite popular and a lot of money has been spent spruiking their alleged benefits to help regrow hair.  They claim to stimulate hair growth (if you believe the marketing claims), but do they really work?

Caffeine is the most widely used stimulant in the world.  Some call it the world’s most used psychoactive drug and it’s well known for it’s benefits.  Probably this morning you had a hit of caffeine in your coffee due to its psychoactive benefits.  If you want to do more research on this most loved drug, it’s otherwise known as 1,3,7-trimethylxanthine.

A Short History of Caffeine Before shampoo

According to humanprogress.org  caffeine was the leading cause of the development of civilization in Europe.  In short, Chinese consumption of caffeinated tea dates back to at least 3,000 BC. But the discovery of coffee, with its generally far stronger caffeine content, seems to have occurred in 15th century Yemen.

Before the Enlightenment, Europeans drank alcohol throughout the day. Then, through trade with the Arab world, a transformation occurred: coffee, rich with caffeine, swept across the continent, and replaced alcohol, a depressant.

As writer Tom Standage put it,
“The impact of the introduction of coffee into Europe during the seventeenth century was particularly noticeable since the most common beverages of the time, even at breakfast, were weak ‘small beer’ and wine. … Coffee … provided a new and safe alternative to alcoholic drinks. Those who drank coffee instead of alcohol began the day alert and stimulated, rather than relaxed and mildly inebriated, and the quality and quantity of their work improved … Western Europe began to emerge from an alcoholic haze that had lasted for centuries.”

So there you have it, Caffeine changed the world with its positive stimulatory effects.  But does it stimulate hair growth? 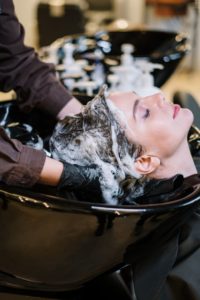 How do Caffeine Shampoos Work?

Studies of human hair follicles show that caffeine increases the amount of cell energy in them.  Caffeine acts against a protein called phosphodiesterase. It has also been shown to increase the protein insulin-like growth factor 1 (IGF1), an important signaling molecule in promoting hair growth.

Caffeine has been shown to potentially reverse the effects of dihydrotestosterone (DHT), the main hormone involved in common balding, thinning hair, and androgenic alopecia.

There have been many impressive claims about caffeine shampoo, but do they work?

Currently, there is no clinically viable evidence that caffeine shampoos have a long-lasting effect on male pattern baldness.  Hair loss in men usually occurs due to a sensitivity to DHT and causes hair follicles in the scalp to miniaturize, weaken, and shrink. Caffeine shampoo has not been proven to negate the effects of DHT in the long term.

In 2018, the UK Advertising Standards Authority ruled that caffeine shampoo Alpecin must no longer advertise that it can “help to reduce hair loss” as there was no adequate evidence to support the claim.

The ASA said: “Taking into account the body of evidence as a whole, we considered that we had not seen any studies of the actual product as used by consumers on their scalp using an accurate and objective analysis of hair growth, in a well-designed and well-conducted trial.

“We concluded that the claim ‘it can actually help to reduce hair loss’ had not been substantiated and was therefore misleading.”

It ruled that the ad must not appear again, adding: “We told Alpecin not to state or imply that their product could reduce hair loss unless they held adequate evidence to support their claims.”

The German brand Alpecin was established following a study in 2007 showing that caffeine caused hair follicles to regrow in a laboratory dish, but there is not enough evidence to prove that caffeine works with hair on the scalp.

“In early stages of genetic hair loss or thinning, caffeine-containing shampoos may be helpful as a supportive treatment in addition to proven and licensed medical treatments for hair loss, such as topical minoxidil and Propecia [finasteride],” she states.

The caffeine molecule penetrates easily into the hair follicles but it remains questionable as to whether a sufficient concentration of caffeine can be delivered via a shampoo to maximise its potential benefits. The growth-enhancing effects of caffeine are likely to be greater with leave-on topical caffeine solutions, Wong suggests.

Does Caffeine Shampoo Work or is it a Placebo?

It is unclear. Whilst the study above showed that caffeine does stimulate hair growth in a laboratory dish; there is not enough evidence to prove it works with hair on the scalp.

Wong states, “Caffeine shampoos are certainly worth trying as a preventative measure or in addition to medical treatments for hair loss in early stages of common balding for a potential additive effect,” she adds. “However, it is not likely to make a difference in more advanced stages of hair thinning.”

Further research is being done every year on caffeine shampoos, and it is possible to find many reviews across the internet which claim caffeine shampoos have a positive effect on hair loss.  Despite this, it is important to take these reviews with a pinch of salt. Some people may be experiencing a placebo effect, whereby simply using the shampoo gives them greater self-confidence when looking in the mirror. Lastly, it is important to bear in mind that some types of hair loss come and go, and so in some cases, experiencing regrowth after using a caffeine shampoo may simply be a coincidence.

Scientific Studies on Caffeine Shampoo as a Hair loss Treatment

According to a paper published by the International Journal of Trichology, in a blind study, when male hair follicles were exposed to caffeine for 120-192 hours (that’s one long shower!), there were some positive benefits seen.

A study in 2012 showed promising results in vitro study[1].   “In vitro” simply means in glass, ie in a petri dish or a test tube (much like the 2007 study).   This study involved taking some scalp samples from men with male pattern hair loss (androgenic alopecia), and exposing them to caffeine to see it would inhibit the effects of hair loss caused by DHT (di-hydrotestosterone).  It was reported the addition of caffeine at a concentration of 0.001% and 0.005% for a minimum of 120 hours, was able to counteract the suppressive effects of testosterone on hair growth.

Later, another study assessed the penetration of topical caffeine in hair follicles.  It was able to show that hair follicles are a faster route for drug delivery than through the skin alone.

A further study assessed the follicular penetration of caffeine in a shampoo for 2 minutes and was able to show some level of follicular penetration.  We are doubtful that 2 minutes of a diluted concentration of caffeine in shampoo will really make a significant difference to your hair.  Let’s face it, it takes most of us several shots of coffee just to get started in the morning.  How much more caffeine is required to get your hair follicles to overcome the effects of genetic hair loss?  We don’t know the answer to that question, but we are doubtful of the efficacy of caffeine as a hair loss shampoo or hair loss treatment.

According to Manish Bansal et al  the exact role and efficacy of caffeine in the regrowth and management of hair loss needs further investigation.  We look forward to seeing the results!

According to the Leukemia Foundation , who have performed their own studies, and who have also read the scientific data on this subject “the results are not promising actual hair growth”. Yes, we agree.

Side-effects from caffeine shampoos are minimal, according to Wong.  There may be a low risk of scalp irritation if people are sensitive to the caffeine or any of the ingredients contained in the shampoo.  This could be said for almost any shampoo.

You were not leaving your cart just like that, right?

Enter your details below to save your shopping cart for later. And, who knows, maybe we will even send you a sweet discount code :)

During the Sydney Lockdown, we will be processing orders once a week in order to minimise the movement of our team.

If you have questions about your order we are here to help.  Please contact us at:

We apologise for the interruption of our regular services to you.

Please be patient until circumstances return to normal.

We will send you a notification and tracking number when your order is sent.